Ranchers: “We Are In a Crisis But No One Is Listening” – In Wake of Impending Brazilian Beef Imports, Group Delivers Solution to Congress 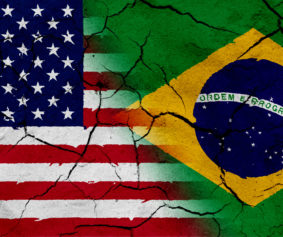 Billings, Mont. – In response to the late February announcement by the U.S. Department of Agriculture (USDA) that it will open the U.S. market to fresh beef from Brazil – a country with a history of engaging in corrupt food safety practices – R-CALF USA and its thousands of members are distributing a research paper to congressional offices titled Restoring Mandatory COOL for Beef Without Running Afoul of the WTO’s Adverse Ruling.

R-CALF USA said today that Brazil could soon begin exporting significant quantities of fresh beef to the U.S. and current law does not require the foreign country-of-origin label – which is required on all imported beef when entering the U.S. market – to be retained through retail sale.

“This means the law does not require importers to keep the known country-of-origin information on the actual package of imported beef that is offered for sale to consumers at retail stores,” said R-CALF USA CEO Bill Bullard.

“This also means beef produced by America’s cattle farmers and ranchers cannot compete against the soon-to-arrive increased quantities of Brazilian beef as both domestic and Brazilian beef will be labeled the same – they will each have identical USDA inspection stickers on them so consumers cannot tell them apart,” he added.

Bullard said the only way to end this consumer deception and to allow American-produced beef to compete with the surpluses created by undifferentiated imports is for Congress to pass legislation requiring Mandatory Country-of-Origin Labeling (M-COOL) on all beef products sold at retail stores.

Congress removed beef and pork from the current M-COOL law in late 2015, though the law continues to cover many other food products. And, while R-CALF USA and its members have been calling on Congress for the reinstatement of M-COOL for beef ever since, Congress has refused to take action.

Bullard said many R-CALF USA members have received “canned” responses from their congressional delegations stating Congress cannot reinstate M-COOL for beef because the World Trade Organization (WTO) has authorized Canada and Mexico to impose retaliatory tariffs of over $1 billion if the labeling requirements for beef were restored.

R-CALF USA’s research paper addresses this issue directly and reveals that Congress should pass a new M-COOL law for beef that substantively changes the old law’s recordkeeping and labeling requirements and that greatly expands the scope of products to be labeled.

According to Bullard, such a new law would not only render the WTO’s prior ruling inapplicable, but it would greatly improve the old labeling regime for beef and provide M-COOL labels on even more beef products purchased by American consumers.

“This action is absolutely imperative now that the Trump Administration is encouraging even more undifferentiated beef to enter our domestic market. Imperative because America’s family-owned cattle farms and ranches have seen their average annual incomes over the past three years slashed by nearly 20% compared to the average 5-year income they received before the Trump Administration took office.

“America’s cow/calf producers, the largest segment of America’s cattle industry, have seen the average value of their cattle slashed by nearly $200 per head during the past three years and many of them will not survive past this year’s election.

“We are in a crisis, but no one is listening. The least Congress or the Trump Administration can do is give America’s cattle producers the tool they need to compete against imported beef in their own domestic market. We hope our research paper will trigger someone to act,” Bullard concluded.