Does “Beef: It’s What’s For Dinner” violate the First Amendment? In Montana, a judge says yes 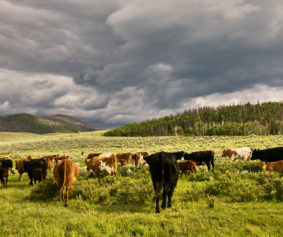 Does “Beef: It’s What’s For Dinner” violate the First Amendment? In Montana, a judge says yes

Last week, the United States District Court for the District of Montana issued a decision that could have major implications for the beef industry inside the state and beyond. Judge Brian Morris upheld a lower court’s decision that the beef checkoff program, as currently operated, violates the First Amendment rights of the state’s cattle ranchers. As as result, the Montana Beef Council (MBC) will only be allowed to collect funds from producers who voluntarily opt in to the program.

Quick refresher: checkoff programs are a mandatory tax the federal government collects on certain agricultural commodities, money farmers are compelled to pay to fund industry research and promotion. Over the years, checkoffs have raised billions of dollars—and have paid for some iconic advertising, from “Got Milk?” to “Beef: It’s What’s for Dinner.” But they’ve also been a sore spot for farmers who claim they don’t have enough say over the way the funds are being used, yet are forced to pay even when they feel the message doesn’t serve their interests.

To understand why the Montana case could be such a big deal, here’s what you need to know: In 2005, the Supreme Court ruled that, in order to be constitutionally viable, checkoff programs must be overseen directly by the federal government. The government, after all, can compel certain forms of speech: I have to fund the military through my taxes, for instance, even if I don’t like its actions. Legally, the government is granted that exception only because it’s supposed to be an extension of the people’s voice already (thanks to our democratically elected representatives). If you don’t like a policy paid for by your taxes, the logic goes, you can always vote to change the government. (For more on this, see my piece on the fraught legal history of checkoffs.)

But private entities cannot compel speech, and that’s where the Montana case comes in. Beef checkoff money is split evenly between the federal Cattlemen’s Beef Board and smaller, state-level organizations like the Montana Beef Council—private entities not subject to the same level federal oversight. That’s why the Ranchers-Cattlemen Action Legal Fund (R-CALF) filed suit against the United States Department of Agriculture (USDA), arguing that compelling payments to a private organization amounts to an unconstitutional first amendment violation.

The suit’s unwitting catalyst was a famous fast food chain: advertisements ran put out by Wendy’s that promoting the company’s use of fresh, “North American” beef in its four-cornered burgers. Since the ads were funded, in part, by the Montana Beef Council, some of the state’s ranchers felt their checkoff dollars were being used against them. Why were they being forced to fund the promotion of beef that came not just from the U.S., but also Mexico and Canada?

“That’s what I think made the case unique: It was a clear, in-your-face insult to U.S. cattlemen that were paying into the Montana beef checkoff,” says Mike Callicrate, a Kansas rancher and activist who’s been a longtime critic of the beef checkoff.

Where some saw an insult, R-CALF, another vocal opponent, saw opportunity.

“After the Supreme Court ruling that said that the checkoff was government speech, we knew we had to find another avenue,” Bill Bullard, R-CALF’s CEO, tells me. “That’s why we focused on money taken by the states.”

The state’s cattle ranchers will still have to pay into the checkoff program—$1 per head of cattle. But the Montana Beef Council will only receive its fifty percent share of that money when a rancher opts in. In Bullard’s view, state funds like Montana’s have long been used to suit the interests of politically powerful meat packers. He thinks the ruling will deprive them of a crucial source of income, and may help level the playing field between beef producers and processors. (Again, you can read more in my history of the beef checkoff and its discontents.)

“Our industry has been dominated by multinational meatpackers that have been working to vertically integrate and control the supply chain of the U.S. cattle industry,” Bullard says. “Now, this case gives us hope that we’re able to pull further away from the integration that the packers have already accomplished, ensuring that we can maintain a widely dispersed family farm system of cattle production in America.”

It’s not a done deal yet: USDA may decide to appeal. But it also has the opportunity to respect the ruling, or even play an active role in rolling out voluntary state-level checkoff participation in other states—heading off a raft of potential lawsuits elsewhere. No one’s quite sure what will happen, but Dudley Butler of Butler Farm & Ranch Law, which represented the plaintiff, feels that future arguments against this decision would face a tough legal battle.

“People look at the constitution sometimes like they look at the Bible, they pick and choose what parts they want to use,” he tells me. “But the First Amendment right is extremely important. Under our system of government, you just cannot force speech on someone—unless it passes the rigors of being determined by a court it is government speech.”

For its part, the Montana Beef Council—which was not named in the suit—is taking a hard look at its post-ruling future.

“As a result of the preliminary injunction, after assessments are collected from Montana beef producers, if they do not provide prior affirmative consent to the Montana Beef Council, their full assessment will be forwarded to the Cattlemen’s Beef Board for general use on national programs and projects,” it says, in a statement. “MBC is working through the details to develop a process for this Court Order and a way for producers to provide consent.”

It could be an onerous task. And complaints about the federal checkoff program are likely to remain. But for now, the victors are celebrating as they look ahead.

“It’s probably the biggest thing that independent producers have achieved in trying to get their interests represented by the government,” Bullard says.

Joe Fassler is New Food Economy‘s senior editor. His food safety and public health reporting has been a finalist for the James Beard Foundation Award in Journalism. Follow him @joefassler.