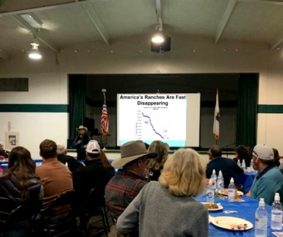 Bullard said there are two types of country-of-origin labels: One that helps the entire live cattle supply chain and one that benefits only beef packers and beef importers at the expense of both cattle producers and beef consumers.

The new policy position reportedly floated by Perdue during a congressional hearing last week included labels that read “slaughtered and processed in the U.S.” rather than describing the origin of meat.

“This is exactly what the meatpackers and meat importers want: a label that does not identify in which country the cattle used to produce the meat were born and raised,” Bullard said.

He said that because such a label does not identify the origins of live cattle, it would provide no benefit to America’s cattle farmers and ranchers. This he said was because the meatpackers and importers could continue sourcing cheaper cattle and cheaper beef from 20 foreign countries and continue to pass it off to unsuspecting consumers as a domestic product because it would state USA on the label.

Bullard insisted that the only way to strengthen the domestic live cattle supply chain – which means America’s cattle producers, is to give them the opportunity to build demand for cattle born and raised in the United States. And, he added the only way to accomplish this is for Congress to pass new legislation to require Mandatory Country-of-Origin Labeling (M-COOL) on all beef sold in America.

“We don’t live in a world where multinational beef packers want to help America’s cattle producers increase demand for their live cattle exclusively born and raised in the United States. It’s against their financial interests to do so,” said Bullard.

During the meeting Bullard gave a one-hour presentation titled “Why America Is Losing Its Ranches.” In addition to urging all attendees to keep calling their members of Congress until they agree to introduce and support M-COOL legislation, he also gave updates on R-CALF USA’s three ongoing legal cases. Those cases include the group’s historic class action antitrust lawsuit against the Big 4 beef packers; their case that has already caused Perdue to withdraw his Mandatory Radio Frequency Identification (M-RFID) plan that was to take effect on January 1, 2023; and their successful case against the beef checkoff program for which the group was awarded a preliminary injunction to protect the constitutional rights of cattle producers.