Did You Send Your Letters to Trump & Congress Yet? Letters Asking For New M-COOL Legislation Now! 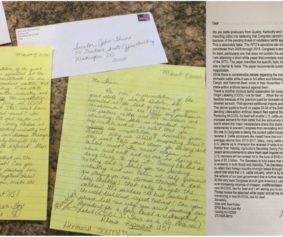 Immediate Action: We need everyone – all our members and all your friends – to send a written letter similar to the one below to President Trump and to each of your two Senators and to your Congressman or Congresswoman this week. Yes, we must do this “old school” – written letters sent via U.S. Mail.

Draft your own letter or use all or some of the sample letter copied below, a Word document letter template is available in the link below, customize it with your name, address and add the president’s, your senator’s or your representative’s name and address. Send handwritten or computer-printed letters. The important thing is that they all receive a written letter from you stating clearly that you want them to introduce new legislation to restore Mandatory Country-of-Origin Labeling for beef.

In addition, we would like you to attach the document we prepared that shows them exactly how they can pass a new M-COOL bill without awakening the feared WTO. The document we want you to attach is titled Restoring Mandatory COOL for Beef Without Running Afoul of the WTO’s Adverse Ruling and is available here.

Here is the sample letter for you to use any way you would like (see addresses below): (This letter template is also available in Word Document here.)

I am a cattle producer from [Town and State] and I am fully aware that you have been browbeaten by the multinational beef importing lobby into believing that Congress cannot reinstate a Mandatory Country-of-Origin Labeling (M-COOL) law for beef because of the pending threat of retaliatory tariffs approved by the World Trade Organization (WTO).

This is absolutely false. The WTO’s sanctions can only apply if Congress reenacts the same M-COOL law that the WTO considered from 2009 through 2015. Congress is absolutely free to exercise its constitutional right to pass a new M-COOL law for beef, particularly one that does not contain the same requirements as the one passed in 2002 and amended in 2008.

I am attaching a short white paper that concisely explains how Congress can reinstate M-COOL for beef without running afoul of the WTO. The paper identifies the specific facts the WTO used as the basis for its adverse ruling that the old M-COOL law was a barrier to trade. The paper recommends substantively new requirements that render the WTO’s prior ruling inapplicable.

While there is considerable debate regarding the impact the old M-COOL law had on both the demand for and price of domestic cattle while it was in full effect and following its repeal. Here is what the nation’s four largest packers – Tyson, JBS, Cargill, and National Beef, wrote in their November 13, 2019 joint brief in support of their joint motion to dismiss the pending class-action antitrust lawsuit against them:

There is another obvious lawful explanation for increased imports. In 2016, Congress repealed the Mandatory Country of Origin Labeling (COOL) rule for beef. . . When the rule was in place, domestic feedlots could charge higher prices than foreign feedlots because of the premium paid for domestic beef. . . After the rule was repealed, foreign beef no longer had to be labelled as such. That spurred additional imports and caused domestic cattle prices to fall.

The above quote is found on pages 33-34 of the Defendant’s Nov. 13, 2019 joint brief in support of their motion to dismiss the pending class-action antitrust lawsuit filed against them.

Restoring M-COOL for beef will enable U.S. cattle producers to engage in marketing and promotional activities intended to increase demand for their cattle that are exclusively born, raised, and slaughtered in the United States. We do not live in a world where the major meatpackers share this desire to increase demand for domestic cattle and that is why they fight so vehemently to prevent Congress from reinstating M-COOL for beef.

No one in Congress is taking the current cattle industry crisis seriously, and no meaningful legislation has been introduced to reverse it. Cattle producers like myself have had our 2019 income slashed by 20 percent or more compared to our 5-year average returns from 2013-2017. Many, many cattle producers will not survive another year unless someone in Washington, D.C. stands up to champion the reversal of what is now a long-term, disastrous trend.

Rather than helping, Agriculture Secretary Sonny Purdue is taking steps to accelerate the exodus of cattle producers. His recent announcements to allow fresh beef imports from Brazil and Namibia will do just that. His own economic analysis shows U.S. ranchers will be hardest hit to the tune of $143 million. His own reports show Brazil subsidizes its cattle production to the tune of $1.2 billion. The Secretary is fully aware that the most contagious disease known to cattle – foot-and-mouth disease – is endemic in both Brazil and Namibia. The Secretary is also fully aware that imports from Brazil and Namibia are not required to retain their foreign country-of-origin labels through retail sale, meaning all the way to the consumer. Congress must not stand idle while the U.S. cattle industry, which is by far the largest segment of American agriculture, continues to suffer under the actions of our own government that is further depriving us of our ability to even compete against imported beef and cattle.

At the very least Congress should give America’s cattle producers the opportunity to begin competing against the ever-increasing volumes of cheaper, undifferentiated imported beef and cattle. This can only be accomplished by passing a new M-COOL law for beef and I am asking you to do just that.

Please review the attached white paper and let me know if you are willing to stand up for America’s cattle producers by introducing a new M-COOL law for beef.

[Your Name and Address]

Attachment [attach the paper on how to restore M-COOL]

Here are the addresses for sending your letters:

For your Congressman or Congresswoman:

Good luck with your letters and thank you for your ongoing support. We’re going to win this!

Share this with your friends, neighbors and anyone you do business with and ask them to send their own letters too!

Learn more about the campaign to restore country-of-origin labeling for beef at www.LabelOurBeef.com.