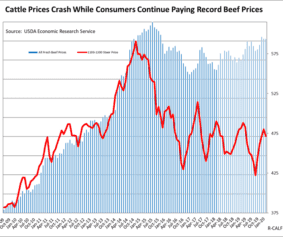 Billings, Mont. – Speaking Friday in Falkville, Alabama, to area cattle producers, R-CALF USA director for the region and past R-CALF USA president George Chambers, and the group’s CEO, Bill Bullard, provided an update on the state of the U.S. cattle industry.

“Your industry is not in the shape it’s in because of droughts, floods, a strong dollar, competing proteins, or because you are poor managers or inefficient,” Bullard told the crowd adding, “No, your industry is in the shape it’s in by design – the design by some of the most powerful political and economic forces ever to march the halls of Congress.

He said the audience need only look at their sister hog, chicken and sheep industries to learn of the model that the multinational packers have already perfected in those sister industries and that they are now applying to the cattle industry, with the goal of capturing control of the entire live cattle supply chain away from independent cattlemen and women.

Bullard was asked what other initiatives R-CALF USA is pursuing in addition to trying to pass new legislation to require Mandatory Country-of-Origin Labeling (M-COOL) on all beef sold in America’s grocery stores and the group’s antitrust lawsuit against the nation’s top four beef packers. He responded by stating that back in 2007 his group urged the introduction of a spot market protection bill to require packers to increase their purchases within the industry’s cash market – its price discovery market.

But, Bullard explained that the spot market protection reform effort along with several other reforms such as their ban on packer ownership of livestock and their legislation to reform the packer’s formula contracting methods that allow packers to accumulate captive supplies, were all defeated by the meatpackers and the NCBA.

His point was that the market is dysfunctional today because the meatpacking lobby had prevented the reforms R-CALF USA has been seeking for years, including proper enforcement of U.S. antitrust laws, M-COOL, and the rulemaking to implement the protections contained in the near 100-year-old Packers and Stockyards Act.

He said the current market’s dysfunction, as evidenced by “strong beef demand, strong beef exports, and a continued willingness on the part of consumers to pay near record prices for beef, all while cattle prices remain seriously depressed” are the result of the failure of cattle producers to join together to change the negative trajectory of their U.S. cattle industry.

An Alabama cattleman criticized Bullard for supporting the rulemaking to prohibit undue preferences under the Packers and Stockyards Act because, as he said, the rulemaking would limit producers of high quality cattle from receiving a premium in the marketplace, arguing that packers would be forced to pay the same price for cattle regardless of the quality.

Bullard responded that the questioner had been misled regarding the Packers and Stockyards Act’s protections. He said the Act does not prohibit preferences, such as those based on quality, only “undue preferences.” He further provided the analogy of the prohibition against undue influence when making contracts.

He explained it is not improper for a person to apply influence to another to encourage them to enter a contract, but when that influence rises to the level of depriving the other person of their free will, freedom to choose, or their ability to avoid being disadvantaged, then that would likely be unlawful.

“This is what the undue preference prohibition means under the Packers and Stockyards Act,” he explained. And stated that when a packer’s preference rises to the level of depriving cattle sellers of their free will, their freedom of choice, or their ability to avoid being economically or financially disadvantaged, it is and should be unlawful.

The lively meeting, which is the first open exchange between the policies of the NCBA and R-CALF USA since the 2004 public debate between the two groups in La Junta, Colorado, is available to watch here on Facebook: Part 1 is available to watch here, watch part 2 here, and watch part 3 here. The question and answer segment starts at the beginning of part 2 and continues through part 3.