WE NEED YOUR HELP!

This is a campaign to get Congress to immediately pass the “American Beef Labeling Act,” S.2716 in the Senate or H.R.7291 in the House, that was introduced in Congress.

The “American Beef Labeling Act” (S.2716 and H.R.7291 ) requires all beef, including imported beef, to be labeled as to where it was born, raised and harvested.

WE NEED YOUR CALLS!

Ask For Your Senators and Representative By Name

If You’re a Cattle Producer, Say:  “Hello, my name is ________________ and I’m a cattle producer from [City/State]. Consumers are paying record high prices for beef while my cattle prices are seriously depressed. One reason for this is because consumers cannot tell the difference between beef from my cattle and beef from foreign cattle. Please fix this by cosponsoring and immediately passing Senate Bill 2716 (or House Bill 7291) that reinstates mandatory country of origin labeling for beef. I need you to pass this bill so I can begin competing in my own market. Thank you.”

Thank you for your calls!

In addition to the M-COOL bill (S.2716), Congress must also pass the ’50/14 Cattle Market Protection’ bill (S.949) that requires the large packers to purchase at least 50% the cattle they slaughter in the cash market each week and to harvest those cattle within 14 days.

On November 30, 2021, the Protecting America’s Meatpacking Workers Act (S.3285 and H.R.6250) was introduced. S.3285 and H.R.6250 includes MCOOL for beef, pork and dairy, a requirement for large packers to buy 50% of their cattle in the cash market, a ban on unpriced contracts and a ban on packer ownership of cattle more than 7 days.

Ask For Your Senators

Here’s What To Say: “Hello, my name is ______________ and I’m a [cattle producer or consumer] from [City/State]. Our cattle market is broken and has been for many years. Beef prices have skyrocketed while cattle prices are too low for ranchers to remain profitable. I need you to fix this as quickly as possible, you can do that by supporting Senate Bills S.3285, S.949 and S.2716.

Senate Bill 3285 (and its related House Bill 6250) is the Protecting America’s Meatpacking Workers Act (PAMWA) that includes all the important reforms needed to fix the broken cattle market such as mandatory country of origin labeling (MCOOL) for beef, requirement for packers to buy 50% of their cattle in the cash market, a ban on unpriced contracts and a ban on packer ownership of cattle more than 7 days.

Senate Bill 949 is the cattle market protection bill (50/14) that restores competition for cattle by requiring large packers to buy 50% of their cattle in the cash market and to slaughter and requires those cattle to be harvested within 14 days.

Senate Bill 2716 is the mandatory country of origin labeling (MCOOL) for beef that will allow consumers to choose to purchase USA born, raised and harvested beef or foreign beef.

These reforms will immediately fix our cattle market and protect our nation’s food supply.

-Bill is introduced in the U.S. Senate.

-Approved Bill is sent to the floor of the Senate.

-If a majority of Senators (51) vote ‘yes’ the Bill passes the U.S. Senate and goes to the U.S. House of Representatives.

-Approved Bill is sent to the floor of the House.

-If a majority of Representatives (218) vote ‘yes’ the bill passes House and goes to the President.

-The President can sign and pass the bill, or refuse to sign and veto the bill. A 2/3 majority vote in the Senate and House is required to override the veto.

LETTERS TO THE EDITOR

Bullard: Beef Packers, Allies Urge Congress to Do Nothing in Face of Broken Cattle Markets

Shammel: Letter to the editor: Support Country of Origin labeling | Letters to the Editor | billingsgazette.com (Mont.)

Paulsen: MCOOL and 50/14 Letter to the Editor Crofton Journal (Neb.)

Share the Resolution to Support S.2716 Mandatory COOL for Beef (available here) with your state legislator or Tribal Council and ask them to introduce in your 2022 state legislative session.

So far, the South Dakota State Legislature and the Navajo Nation Council have passed Resolutions to Support MCOOL.

4.18.2022 – The Return of COOL? Legislation Would Resurrect Origin Labeling for Meat | The Daily Yonder

I’m Here To Ask For Your Help To Get the American Beef Labeling Act – Eric Nelson, Moville, Iowa

Why I Think We Need Mandatory Country of Origin Labeling on Beef – Matt Paulsen, Niobrara, Neb. 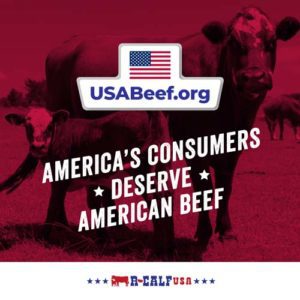 About R-CALF USA: R-CALF USA is the nation’s largest producer-only trade association representing the U.S. cattle industry. Our mission is to ensure the continued profitability and independence of United States cattle producers. We’re the ones who led the victory to get the country of origin labeling (COOL) law passed in 2002 before it was repealed for beef and pork in 2015. Our efforts still help fruit, vegetable, fish, chicken, lamb and nut farmers win back their markets because all these commodities remain under the COOL law.