Home/Latest News, News Releases/Cattle Producers Raise More Than 40K to Fight for the Opportunity to Vote on Beef Checkoff
Previous Next

Ft. Pierre, S.D. – On December 12, 2020, Fort Pierre Livestock Auction hosted a successful fund-raiser that generated more than $40,000 for the national Beef Checkoff Referendum Campaign. The money generated from the calf sale will be used to directly fund this campaign. 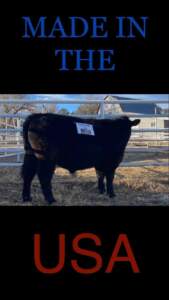 Steer donated by Vaughn and Lois Meyer of Reva, S.D.

A market ready steer was donated by Vaughn and Lois Meyer of Reva, S.D., and Kenzy Backgrounding in Gregory, S.D. The value of the steer was further increased when U.S. Beef Producers in Ft. Pierre, S.D., donated the processing of the animal.

Vaughn Meyer serves as the R-CALF USA Checkoff Committee Chair and initiated this fundraising effort. “Funding events and donations are crucial in supporting the Checkoff petition drive to purchase materials and advertising for all the hard-working office and ground personnel that are sacrificing their own time and resources to assist beef producers with their first Checkoff vote in over 35 years,” said Meyer.

“Although the Beef Promotion Act allows periodic referendums, there has never been a referendum giving producers a say in their Checkoff,” he continued. “Voting is the ‘American way’ and if producers, especially young producers, want a voice in their program they have to secure a referendum consisting of over 10% (89,000) of their fellow producers. Unlike most American elections, this referendum obstacle must be overcome before any voting can take place.”

When asked why he stepped forward to host this fundraiser, Bryan Hanson, co-owner of Ft. Pierre Livestock Auction and former R-CALF USA president said, “The Checkoff program doesn’t differentiate it’s advertising program to U.S. product versus imported product. That is something I have been frustrated with for quite some time.

“The number two issue is the main contractor of the Checkoff is the National Cattlemen’s Beef Association (NCBA) that has fought us on several issues that would help independent producers be profitable,” Hanson continued. “They were instrumental in helping to lobby to get rid of Mandatory Country-of-Origin Labeling (M-COOL) for beef rather than litigate the World Trade Organization (WTO); they are extremely forceful in fighting any attempt to reimplement M-COOL for beef; and they oppose 50/14 and that is something that is very important to put competition into this fed cattle industry.”

The 50/14 bill would require beef packers with more than one plant to purchase at least 50% of their cattle in the competitive cash market each day and require those cattle to be harvested within 14 days of purchase.

R-CALF USA Field Director Karina Jones added, “This rollover fundraiser was unique in the fact that we used our national checkoff committee to bring in donations from across the United States. The fact that we received donations from 16 different states; from California to Kentucky and North Dakota to Texas tells us how much support there is for this campaign.”

“It has been 35 years since American cattle producers were given the opportunity to vote on a Beef Checkoff Referendum,” said Jones adding, “The strong support for this fundraiser, which was organized in a short period of time, speaks volumes as to how strongly cattle producers want to vote again.”

It was a packed house at Fort Pierre Livestock and the energy could be felt. “Our Ft. Pierre rollover fundraiser was a huge success thanks to all the independent cattle producers, the numerous agricultural related main street businesses and the dedicated crew at Ft. Pierre Livestock Auction. I am especially grateful to our R-CALF USA staff and board of directors who have stepped up and undertaken this referendum challenge on behalf of all USA beef producers,” praised Meyer.

Hanson agreed, “I thought it was a pretty big statement that we could hold a rollover auction in Ft. Pierre and raise over $40,000. That shows to me that producers are pretty fired up about this issue.”

“The funds raised are being used to support and maintain the www.CheckoffVote.com website, in addition to the costs incurred by a national producer mailing effort that has already placed the petition into the mailboxes of tens of thousands of cattle producers,” explained Jones.

Cattle producers are encouraged to sign the petition at www.CheckoffVote.com to signal to the U.S. Department of Agriculture (USDA) that the cattle industry desires to vote on a Beef Checkoff Referendum. Hardcopy petitions can be printed from the website for everyone to take around to their cattle producing neighbors to sign. Anyone who would like to donate to support the Checkoff Petition Campaign or send in signed hardcopy petitions can send to Checkoff Vote, P.O. Box 30536, Billings, MT, 59107, or call 406-252-2516.