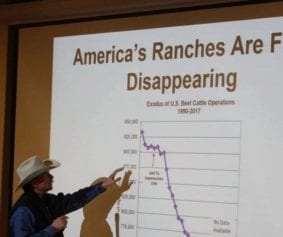 Billings, Mont. – R-CALF USA spoke to hundreds of Colorado and New Mexico ranchers during meetings held in Brush and La Junta, Colo. and Las Cruces, N.M. last week and over the weekend.

“You operate in a global marketplace and the goal of the multinational beef complex is to normalize global cattle prices so they can seamlessly source low-cost cattle from anywhere in the world and sell the resulting beef in whichever country pays the highest prices.

“How can you expect to compete against this world supply of cheaper cattle and cheaper beef when packers and retailers who sell beef from your superior U.S. cattle are not required to distinguish it as a U.S. product with a country-of-origin label?” he rhetorically asked the audiences.

Moving on in his presentation titled “Why America is Losing Its Ranches,” Bullard explained the trajectory of the U.S. cattle industry is pointed downward as a result of historically shrinking numbers of U.S. cattle producers, U.S. cattle, U.S. feedlots, U.S. livestock auction yards, and U.S. meatpackers.

“In fact, the exact opposite occurred. Economic returns to cow/calf producers and feeders were less during the 25 years of NAFTA than they were in the years before NAFTA.”

Bullard explained that what was most alarming was the dismantling of the industry’s competitive infrastructure during 25 years of NAFTA. He said the industry lost 20% of its cattle operations, 3 million of its mother cows, 75% of its farmer-feeders, 25% of its livestock auction yards, and about 48 meatpackers.

“To remain viable, a livestock industry must maintain a critical mass of competitive infrastructure, meaning you must maintain sufficient numbers of producers, cattle, marketing outlets and all the support businesses needed to sustain robust competition all across the nation. Once you lose those, it’s game over because you won’t bring them back.

“Just ask your friends in your sister hog, poultry and sheep industries how competitive they are now that their respective competitive infrastructures have been dismantled,” he said.

Bullard said the cattle industry still has the critical mass of competitive infrastructure to maintain a competitive industry for its independent producers. But he warned that unless the current trajectory of the industry is changed, the point of no return will soon be reached.

“You can’t change this trajectory on your own. That means we must get organized right now so we are strong enough to fix our broken markets, restore mandatory country-of-origin labeling for beef, and stop the government from partnering with multinational companies who are trying to capture control over our live cattle supply chain. We can do this if we stand together as a group dedicated to make needed changes,” he concluded.