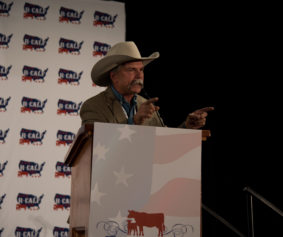 Below please find an op-ed by R-CALF USA CEO Bill Bullard. It is a response to Drovers Editor Greg Henderson’s October 12, 2018 article titled “Contentious Battle Continues Over the Beef Checkoff.”

Flame Fanning and Other Useless Deflections

Despite his October 12 article’s title, Contentious Battle Continues Over the Beef Checkoff, Drovers Editor Greg Henderson devotes considerable ink to fanning the flames for desperate souls trying to fabricate relationships between R-CALF USA and the Humane Society of the United States (HSUS).

Mr. Henderson interviewed no one that knew of a time when R-CALF USA ever worked with the HSUS; because we don’t.

To be fair, Mr. Henderson allowed R-CALF USA and its lead Beef Checkoff attorney, David Muraskin, to rebut the tired argument that they have relationships with HSUS. But, Mr. Henderson’s principle focus is there, not on the merits of our Beef Checkoff case.

Mr. Henderson quotes anti-R-CALF USA groups and individuals who gleefully fabricate fictitious working relationships based on third-parties’ alignments and the absence of a money trail. This is the stuff that sells the National Enquirer.

Under this logic, there is a stronger connection between the National Cattlemen’s Beef Association (NCBA) and Humane Society International because NCBA and the Beef Checkoff work with the Global Roundtable for Sustainable Beef (GRSB) which, in turn, works with the Humane Society International. Of course, NCBA would be right to call this argument sordid. Yet, it is doubly so when applied to R-CALF USA where NCBA has affirmatively tried to find a financial connection between R-CALF USA and HSUS and failed.

The GRSB and the Humane Society International are partners in the Global Agenda for Sustainable Livestock, which itself is a member of the GRSB. See on pages 41, 47:   http://www.livestockdialogue.org/fileadmin/templates/res_livestock/docs/Progress_Report/Report_GASL_2016-17_low_june_ok3.pdf.

But, how is this relevant to the merits of the GRSB in which transnational corporations want to dictate global production standards to U.S. cattle producers, require electronic animal identification, and require producers to pay third-party auditors, all as conditions to having timely access to the marketplace?

Critical thinkers will focus on the GRSB itself, and dismiss the rest as fodder for National Enquirer readers.

This applies to our Beef Checkoff litigation that allows producers to choose where they want their money to go, which empowers them to vote with their pocketbooks. If they are choosing not to fund their state beef council, that itself could indicate the Beef Checkoff is in dire need of reform. Our case does nothing to take a cent away from beef promotion.

Since 2006, R-CALF USA’s thousands of cattle-owning members passed no less than 15 policy resolutions designed to reform the Beef Checkoff. Our members’ policies are available at www.r-calfusa.com. The executive and legislative branches ignored our substantive requests, so now we’re taking the matter to the judicial branch.

How can those claiming they don’t want government mandates or government involvement in their industry now claim that allowing cattle producers to voluntarily choose where their hard-earned money goes is wrong?

Mr. Henderson distracts readers from the merits of our case by raising the specter of wrongdoing. He queries how R-CALF USA, with a budget of roughly $400,000, can afford legal costs for litigating the Beef Checkoff.

The answer is we do it the same way we have covered costs to protect against the introduction of BSE; to pass and then protect COOL, including against the NCBA’s unsuccessful lawsuit; to stop the JBS acquisition of National Beef Packing Company; to stop the government from implementing its National Animal Identification System (NAIS); and now to reform the Beef Checkoff.