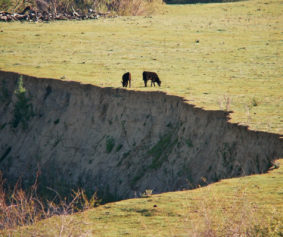 The court took action after a magistrate previously recommended the injunction in December 2016, agreeing with plaintiff in the suit – the Ranchers Cattlemen Action Legal Fund United Stockgrowers of America (R-CALF USA) – that the Checkoff was being run unconstitutionally.

“The Government violates the First Amendment when it compels a citizen to subsidize the private speech of a private entity without first obtaining the citizen’s ‘affirmative consent.’ … What distinguishes unconstitutional subsidies for private speech from constitutional subsidies of government speech is not the content of the speech, but rather that the latter is ‘democratic[ally] accountab[le].’ … The USDA does not control how the Montana Beef Council spends the money that it obtains from the federal Beef Checkoff Program”, the court wrote in its decision.

The Beef Checkoff is a federal tax that compels producers to pay $1 per head every time cattle are sold, half of which is used to fund the advertisements of private state beef councils, like the Montana Beef Council. The Montana Beef Council is a private corporation whose members include representatives of the largest multinational beef packers. The council promotes the message that there is no difference between domestic beef produced under U.S. food safety laws and beef produced in foreign countries. It has paid for advertisements for the fast-food chain Wendy’s, for example, to promote hamburgers that use North American beef, meaning beef that can come from anywhere on the continent, but not necessarily Montana or even the United States.

“For well over a decade R-CALF USA members fought to reform what we considered a terribly mismanaged national beef checkoff program. And, for well over a decade we faced an impenetrable wall of top-ranking USDA officials whose connections to the multinational meatpackers’ lobby caused them to steadfastly oppose every single reform proposal we advanced”, said R-CALF USA CEO Bill Bullard. “Yesterday, after a meaningful, law-based evaluation of our concerns, we won. We hope this will be just the first step of correcting over a decade’s worth of beef checkoff program mismanagement.”

Senators Cory Booker of New Jersey and Mike Lee of Utah have put forth bipartisan legislation that would seriously reform the checkoff programs to make them more transparent and accountable to producers.

David Muraskin of Public Justice, lead counsel for the plaintiff in the case, said that the District Court’s decision will “finally provide Montana ranchers leverage to control how their money is spent and their goods are advertised. Without government accountability and control the checkoffs amount to nothing more than a massive transfer of wealth from farmers and ranchers to multinational corporations, which is against our values and laws.”

“For too long the Big Meat Packers and the National Cattlemen’s Beef Association have used their allies in Washington to squelch the voices of rural America,” said J. Dudley Butler, of the Farm and Ranch Law Group. “We hope this is a step towards fairer treatment of farmers and ranchers and a more accountable food system.”