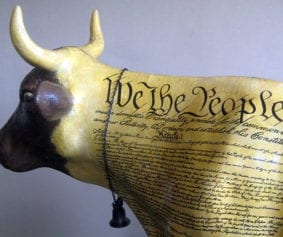 Billings, Mont. – USDA recently admitted it is keeping Montana producers’ beef checkoff money —a federal tax on cattle producers that must be used to promote beef —from being put to use. For years the National Cattlemen’s Beef Association (NCBA) has claimed the Ranchers-Cattlemen Action Legal Fund, United Stockgrowers of America’s (R-CALF USA’s) constitutional challenge to the checkoff would reduce funding for beef promotion. As part of this publicity campaign, on April 25, 2019, the editor of the Western Ag Reporter, Kayla Sargent, started her checkoff story, “Making Money Count in Montana” by stating R-CALF USA’s checkoff lawsuit “has a large portion of Montana’s contributions tied up in a frozen account until the case is settled.”

USDA has now admitted it is the one draining the checkoff of money, in the hopes of protecting the private Montana Beef Council. In 2016, in response to R-CALF USA’s suit, a federal district court held the Montana Beef Council could only use checkoff payments if payers consented to it doing so, because the council is a private entity and uses the money to fund its private speech. If payers don’t consent, the First Amendment requires all of the money to go to the Cattlemen’s Beef Board (CBB), because it uses the government-mandated tax to fund government speech.

USDA has now informed R-CALF USA that while the Montana Beef Council is technically sending more money to the CBB, USDA is allowing CBB to keep the money in a special account so it will not be used at all, in hopes they will eventually be able to overturn the court’s ruling and put the money back under the private council’s control.

What is clear here is that the beef checkoff program is defying the choices made by Montana producers to stop funding the Montana Beef Council and its abuse of the checkoff funds. It is solely the decision of the CBB and the government to refuse to use that money as it was intended, that NCBA would attempt to distract from this reality by pointing the finger at R-CALF USA is no surprise.

Throughout this case, NCBA has put out misinformation that we are trying to keep the checkoff from succeeding. Now the truth has come out: NCBA and its allies on the Montana Beef Council are so desperate to protect their slush fund they’ll actually reduce the entire checkoff budget for years on the off chance that someday they’ll be able to regain access to that money.

“While the Government and Montana Beef Council are not violating the specific words in the court’s order —as it only required that the money go to the CBB unless producers consent to the money staying with the Montana Beef Council —they are clearly ignoring its spirit. The point of requiring checkoff money to go to the CBB is that is the only way it could be constitutionally expended, so there is no basis to keep the money locked away; everyone thought USDA and the CBB would use the money as required under the Beef Act,” said David Muraskin, a Public Justice Food Project attorney and lead counsel in R-CALF USA’s beef checkoff litigation from which the ruling stems.

“The council and government’s conduct highlights why the suit is so important. By allowing the private councils to have so much control over the checkoff, their concerns, not those of producers determine how the money is spent (or here stashed away). This is why the First Amendment prohibits them from taking money without the payers’ consent,” continued Muraskin.