U.S. Ranchers Raise Over 50K to Label Their Beef “Product of USA” Again 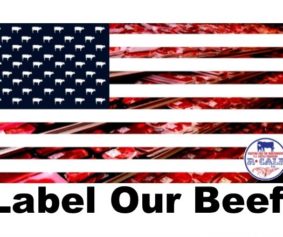 With the resources raised, R-CALF USA kicked-off an all-out nationwide grassroots campaign urging President Trump to help American ranchers and farmers. The group’s members are asking the President to issue an executive order to bring back mandatory origin labels for beef that’s in line with his Buy American Hire American Executive Order. The executive order states:

“…In order to promote economic and national security and to help stimulate economic growth, create good jobs at decent wages, strengthen our middle class and support the American manufacturing and defense industrial bases, it shall be the policy of the executive branch to maximize, consistent with law,…,the use of goods, products, and materials produced in the United States.”

“Three simple words, “Product of USA” is the new metaphorical cash cow. When the COOL law was fully implemented from 2013 to 2015, American farmers and ranchers received $325 per calf more compared to the next two years when meat packers were no longer required by law to label beef with its country-of-origin,” Schultz said adding, “That money once stayed in America’s local communities and was recirculated.”

Research has found that buying American products has double the impact on our domestic economy versus buying foreign made products. The COOL law would create American jobs, stimulate economic growth in rural America and protect our national food security.

“American cattle producers are being harmed by lack of origin labels on beef and this fact was confirmed this summer by a U.S. federal district court,” Schultz said adding, “Americans cannot choose to buy American beef unless the mandatory COOL law is restored.”

The group’s fundraising campaign “Label Our Beef” was launched in May and Schulz said it is doing its job of building national awareness for COOL. The campaign is one part of the group’s overall strategy to reinstate the COOL law. Last November, R-CALF USA, Public Justice, Food & Water Watch, and Farm Aid delivered the signatures of 37,299 Americans to the U.S. Commerce Department and the Trump Administration asking to make mandatory COOL a part of the Administration’s trade policies.

“COOL for consumers is all about the choice from whom they buy their beef from being foreign or domestic,” Schultz said. “It’s very difficult to get the public enthused and interested in issues affecting the cattle industry, but we will continue to keep trying.” The Label Our Beef campaign is gaining momentum and has become a hot topic on social media and in the national media. To join the fight to bring back COOL go to www.LabelOurBeef.com.