Sweet Success in the Midst of Turmoil! R-CALF USA raises over $41,500 in Ft. Pierre Roll-Over Sale!

Sweet Success in the Midst of Turmoil! R-CALF USA raises over $41,500 in Ft. Pierre Roll-Over Sale!

As cattle producers face turmoil in the industry; and in the world, R-CALF USA stands firm in its diligence to bring change by leveling the playing field of the U.S. cattle market. In the midst of that diligence, the organization delights as its members rally to support its initiatives. R-CALF USA works on various issues that affect the profitability and viability of independent U.S. cattle producers, such as Mandatory Country-of-Origin Labeling (M-COOL), checkoff reform, livestock price reporting, animal health concerns, captive supplies and packer ownership of livestock as well as various trade agreements.

Ft. Pierre, S.D. – During a season of slim margins and market instability, producers, members and local businesses turned out in fine form and number to rally colossal support for the Ft. Pierre Livestock Annual R-CALF USA Rollover Auction Calf Sale held on Friday, June 5th. Furthering their support, the crowd evidenced their commitment and enthusiasm toward R-CALF USA’s efforts by “putting their money where their mouth is,” in the amount of $41,554 through the repetitive sale of a single donated steer calf.

Rollover auctions are fundraising events hosted by R-CALF USA volunteers to raise money for the organization. Supporters can bid on the calf, then donate it back so it can be auctioned off again and again, until bidding ceases.

Dean and Delia Johnson, who donated the steer calf for the Ft. Pierre Rollover Auction, are avid R-CALF USA supporters since the inception of the organization. They consider the annual steer donation “their way to help.” Delia asserts that “People need to step up because R-CALF USA is the one voice that has consistently been there for the industry. Their heart is for the industry and they want the best for our people. R-CALF USA is the only one willing to fight the true fight!”

Dean and Delia are looking toward their retirement era with a somewhat reticent regard. Delia, a 58-year-old South Dakota ranch wife turned nurse, readily reveals that Dean is 8 days older, but she looks back to a time when both were much younger. “When we started, we both came from ranching families with goals and aspirations. We were 29 when we moved back to the home place. We have worked hard to put together what we have; but the end game was always…always to bring the next generation home.” She pauses, “I’m not sure we have done them a favor,” and then with a dismissive nix of her own doubts; and renewed tenacity, she reflects fondly on the notion of enjoying life…riding side by side with the grandkids. “That was always the end goal. We want it for our grandkids; our son and his wife.” 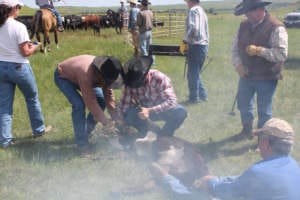 Branding on the Johnson Ranch in Fairburn, S.D.

Delia continues, sharing the regards of the Johnson outfit, “This is what people outside of the industry don’t understand. This isn’t just our job…it’s our entire life. This is how we want to raise our families and it breaks our hearts that so many places are being sold to development; or, handed back to the banks.” Delia reflects on one of the hard days when it seemingly felt as if “it” was slipping through their fingers. She turned to Dean and asked, “What are we going to do if this doesn’t turn around.” Dean replied, “I don’t know how to be anything else.”

Regathering herself, Delia refocuses and turns her eye to business. “We have a lot of passion for our industry and it’s in trouble. We have a lot of forces working against us. The packing industry and our representatives in D.C. are making that dream hard to achieve. We see our check-off dollars being used against us; and, we are angry about that! In every direction that we turn, it seems that there is a growing roadblock in front of us.” Without pause, Delia adds, “Except when we turn to R-CALF.”

Continuing, Delia asserts that “We are at a pivotal time in our industry. This is where the rubber meets the road. We will become ‘chicken-ized’ (vertically integrated) if we don’t have some wins in regard to 1) the Class Action Lawsuit against the “Big 4” – the packers; 2) the proposed bill requiring 50/14 Cash Cattle Trade; and, 3) the Checkoff Petition. Each of these are going be pivotal to our industry.”

The Johnson’s are ever grateful to Bill Bullard, CEO of R-CALF USA. “He has truly been our keystone.” They also acknowledge Bryan Hanson and Ft. Pierre Livestock with kind and keen appreciation, “They have been instrumental in keeping R-CALF USA afloat. That sale barn really puts themselves out there…stopping a sale to step forward for R-CALF USA.”

Bryan’s grandfather, Leif Hanson initially purchased the barn in 1953. After the facility burned in 1978, it was rebuilt by Bryan’s father, Dennis, in 1979. Bryan “partnered up with dad” about 10 years ago.” Bryan and his wife DeLynn have two children; 15-year-old Chase, who sorts at the barn; and 10-year-old Timber who can be seen running tickets on any given day.

Hanson proudly reflects on sale day in humble consideration of his neighbors, friends, and business associates as he rattles off the proceeds of the day; and of the months before the sale as folks made steadfast donations as their calves rolled into market on a soft dime.

As former President of R-CALF USA, Hanson offers insight into the industry as both a legacy participant; and, an astute and stalwart defender of the industry. According to Hanson, “Competition makes the industry better. We make a living selling cattle; to stay in business – we get the best price for them.”

While Hanson is keen on competition, he explains the trend of cow/calf producers. “You used to be able to survive on a 100 head operation; now you have to have a full-time job AND run 100 cows. Over the past 25 years, the packing industry continues to get more concentrated and feeders continue to exit the business, which has also created the same scenario for family ranchers who are also going out of business.”

Hanson believes that many of the industry’s woes lie at the feet of the North American Free Trade Agreement (NAFTA); and, the fact that the trade agreement “allows the import of cattle/boxed beef without tariffs to compete unfairly with domestic cattle.” Hanson explains that, “Since the inception of NAFTA, thousands of U.S. cattle producers have exited the business; which has negatively impacted small towns and communities. Rural America is becoming older because there isn’t enough money to bring our kids home.”

Hanson explains the motives of the beef packing industry. He asserts that “Just as the hog and chicken industry have been fully vertically integrated allowing the packer to own and control those animals (and dollars) from birth to plate; the cattle industry stands as the only industry that has independent producers and an established market discovery system. The packers are working very hard to move that price discovery system into a vertically integrated birth to plate system like hogs and chickens; which renders U.S. producers to be cast as low paid servants on their own land.”

When asked to explain what producers can do, Hanson identifies several issues:

“Imported cattle allow the packers to skew the market because they always have access to cheaper product driving down the value of U.S. cattle. The U.S. currently imports beef from up to 22 different countries; however, nearly all of it gets labeled as a Product of the USA.” According to Hanson, “We must get M-COOL (Mandatory Country of Origin Labeling) reinstated.” The current labeling of foreign beef as U.S. beef “Puts our producers at an extreme disadvantage; and, doesn’t give the consumer the right to support U.S. producers. It essentially dupes the consumer. As an industry, we are asking Trump to follow his “Buy American” slogan as it pertains to M-COOL; which, will empower the consumer with the ability to support the U.S. producer.”

Hanson explains the emergence and the necessity of the Beef Checkoff petition. “Many of us feel that the Checkoff has turned into something different than intended. The Checkoff no longer supports the USA cattle market because it promotes beef regardless of origin. Further, the National Cattlemen’s Beef Association (NCBA) manages the Checkoff, which is a lobbying organization for the packing industry. NCBA was instrumental in getting Congress to repeal M-COOL in December 2015 allowing packers to import deeply discounted beef (as compared to purchasing U.S. fat cattle) with absolutely no transparency. This repeal allows packers to import beef, repackage it, and sell it as a Product of the USA.”

Hanson spares little spite, “To me that is criminal! Imported beef is now used as a captive supply to push down the price of U.S. fat cattle; all the while, U.S. beef prices hit new high prices leaving the packers to make billion-dollar profits as U.S. producers go broke.” Hanson furthers his point as he adds numbers to the equation “During the COVID pandemic, packer profits were $2,000-$3,000 per head while feeders were losing $200-$500 per head. Our supply and demand system is broken, it cannot work when packers have access to an unlimited supply of cheaper imported product.”

Hanson is adamant in his plea for producers to get involved. “Currently we have a petition for a USDA referendum on the Beef Checkoff. We are asking all producers to sign it. We must obtain 88,269 signatures within one year to trigger a referendum vote of all producers. This petition is submitted to the Secretary of Agriculture for the purpose of calling a referendum; and, an up or down vote on the termination of the Beef Promotion & Research Act of 1985. To sign the petition, go to www.WeNeedABeefCheckoffVote.com.

Hanson encourages all producers to contact their senators and representative in support of the 50/14 Cash Cattle Trade Mandate. The 50/14 mandate will essentially require packers to purchase 50% of their fat cattle purchases through cash cattle trade; delivery must occur within 14 days. Senator names and numbers were published in the latest R-CALF USA newsletter, and are also available on the R-CALF USA website at https://www.r-calfusa.com/contact-congress/.

Hanson explains why the mandate is necessary. “Any time an industry has over 50% captive supply it allows controlling stakeholders to put extreme downward pressure on the pricing of the product.” Hanson says if you would like to see that in real time – look no further than COVID. “During COVID, the packers were killing captive supply (contract) cattle and packer owned cattle.” He asserts that based on the gross number of captive supply cattle in play, the cash trade does little to affect the market. Hanson provides an example:

If there are 6,000 cattle available in the auction market and the packers need 1,000 head, they will be competitive in the marketplace. If, however, there are 6,000 available in the auction market, but the packers have already bought/or otherwise acquired 900 of the 1,000 needed; they really aren’t going to affect the market very much. This is what captive supply does to the market in the fat cattle industry.”

Hanson continues by warning producers not to disregard the “14-day delivery” portion of the mandate. Hanson reiterates, “The 14 essentially means that the packer must take delivery within 14 days of the purchase. Currently, delivery may occur in 1-2 days; or even 30-40 days after the purchase. So even when the packers buy cattle on the cash market, they effectively become part of the captive supply because there is no definite delivery date.”

In closing conversation with Hanson, without apprehension, he “encourages folks to join R-CALF USA. It is the only national cattle organization that works for the independent cattle producers. Membership has been on a steady increase for the past 24 months and that isn’t without reason!”