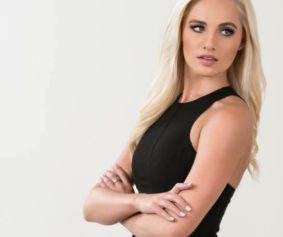 Bill Kluck, SDSGA President, said Lahren is a rising star on social media and she is tackling an important national issue with her hard-hitting commentary that so far has received only lip service from politicians and other celebrities.

Kluck said Lahren is a social media maverick because she’s explaining the direct connection between keeping family farmers and ranchers on their land and the long-term production of a safe, wholesome and secure food supply for all Americans.

“Tomi’s not afraid to speak out about how the government has partnered with big corporations to take livestock production out of the hands of independent ranchers and place it under the control of multinational corporations,” said Kluck.

Kluck explained that Congress’ repeal of the country-of-origin labeling (COOL) law for beef by such a wide margin reveals just how much control those multinational corporations now have over Congress.

Before its repeal, the COOL law enabled consumers to distinguish beef produced exclusively by American ranchers from beef produced in any one of the 20 or so countries from which multinational corporations now are sourcing their beef supplies.

With COOL gone, Kluck said corporations are now undercutting American ranchers by sourcing more and more of their beef supplies from foreign countries.

R-CALF USA CEO Bill Bullard said Lahren’s upcoming speech is titled, “Making the Dinner Table American Again,” and will highlight how the elimination of COOL has allowed multinational corporations to access cheaper and lower quality beef from developing countries and pass it off to unsuspecting Americans as if it were produced by American ranchers.

“Her speech will not be well received by the federal government or by giant food corporations,” said Bullard adding, “After all, together they wiped out 9 of every 10 American hog farmers during the past three decades and now they’re focused on doing the same to cattle ranchers.

The SDSGA and R-CALF USA invite the general public to attend Lahren’s speech for a minimal contribution of $10.00 per person. Tickets can be purchased in advance online at https://www.eventbrite.com/e/tomi-lahren-live-making-the-dinner-table-american-again-tickets-36369493133?aff=ehomecard and follow the instructions.

To preregister and for more information about the R-CALF USA convention, visit www.MakeTheCattleIndustryGreatAgain.com, or call Tatum Lee at 405-834-5710.