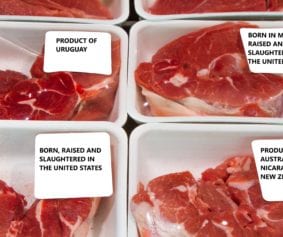 Billings, Mont. – R-CALF USA applauds today’s introduction by Senator Jon Tester (D-MT) a congressional resolution calling on the rest of Congress to “reinstate County-of-Origin labeling for pork and beef to allow consumers to make an informed and free choice about where their food comes from.”

Country-of-Origin Labeling (COOL) was passed by Congress in 2002 and required retailers to affix labels denoting the country of origin of many food products, including beef. However, COOL was not fully implemented for beef until May of 2013.

Upon its 2013 implementation for beef, the COOL law mandated that the foreign labels on all imported beef be retained through retail sale, meaning all the way to the consumer. It also required all beef from animals slaughtered in the U.S. to be labeled as to where the animal had been born, raised and slaughtered.

“With these two essential provisions, consumers were accurately informed as to which beef originated exclusively in foreign countries, in one or more countries, and which beef was exclusively produced by U.S. cattle farmers and ranchers right here in the United States,” said R-CALF USA COOL Committee Chair Mike Schultz.

He also said that COOL’s implementation triggered an all-out assault on the COOL law by the trade group representing the largest U.S. beef packers, the National Cattlemen’s Beef Association (NCBA), and the NCBA’s counterparts in Canada and Mexico who, together, filed an unsuccessful lawsuit in an attempt to repeal the COOL law.

Though the lawsuit reaffirmed the constitutionality of COOL, the countries of Canada and Mexico, which did not want American consumers to know that significant volumes of beef sold in the U.S. was imported, succeeded in convincing the unelected and unappointed World Trade Organization (WTO) to rule that COOL for beef violated global trade rules.

“Senator Tester’s resolution calling on Congress to reinstate COOL for beef and pork is the start we have been waiting for to help us encourage Congress to once again provide us the tools we need to compete in our own domestic market,” said Schultz.

“Importantly, today’s by-partisan resolution supports and compliments President Trump’s directive that Americans start buying and hiring Americans,” Schultz pointed out adding, “Until COOL for beef is once again the law of the land, consumers have no way of helping America’s cattle farmers and ranchers by buying American Beef.”

Schultz said calls are needed now to get every U.S. Senator to support Senator Tester’s resolution to reinstate COOL for pork and beef. He urged both consumers and producers to contact their U.S. Senators’ offices in their state and also to contact their Washington, D.C. offices at 202-224-3121, and asking for their Senators by name.