Billings, Mont. – Analyzing market data for the second half of 2021 generated under the Livestock Mandatory Reporting Act (LMR), R-CALF USA says the recent increase in fed cattle prices are associated with significant increases in the volume of cattle sold in the negotiated cash market.

The group says during the second half of 2021, the weekly negotiated cash volume hit a low of only 57,120 head the week ending August 30, and that was associated with a $125.74 fed cattle price. But since that time, the group says the volume in the cash market steadily increased, and by December 6 the volume had nearly doubled, to 112,080 head, and fed cattle prices increased to over $140 for the first time in over 6 years.

“These data show that when the volume of cattle sold in the negotiated cash market increased by nearly double since August, the fed cattle price that producers received jumped $15 per hundredweight, representing an additional $195 per head for a 1,300 lb. steer by December 6,” said R-CALF USA CEO Bill Bullard adding, “To put it another way, the percentage increase in volume in the negotiated cash market of about 11% was associated with producers receiving nearly $200 per head more for each head of cattle sold.” 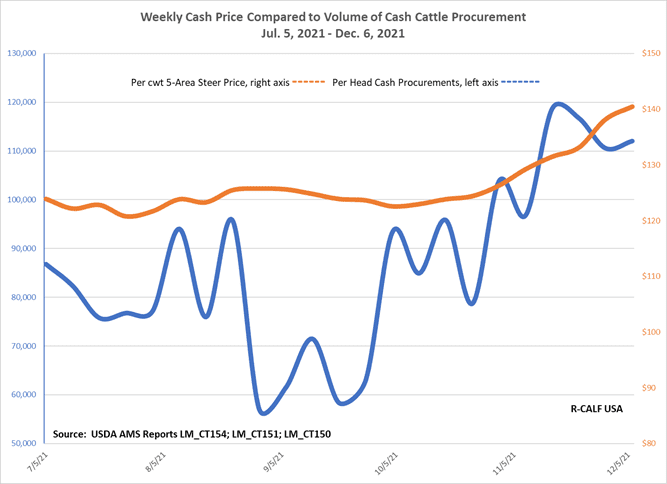 “The Fischer-Grassley Bill, S.3229, will instead be a boon to packers, allowing them to continually purchase cattle for less than their competitive value, and that means it’ll be a bust for America’s cattle producers,” Bullard commented.

Bullard says his group continues to support the original cattle market protection bill, S.949, that will allow cattle producers to benefit from a robustly competitive negotiated cash market at least at a 50% volume level.