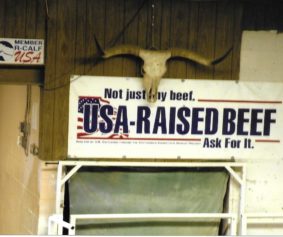 Billings, Mont. – Yesterday, R-CALF USA, through its attorneys, filed documents in the federal district court in Montana asking the court to reject the U.S. Department of Agriculture’s (USDA’s) argument that it has complete discretion to “chip away” at the First Amendment.

The documents address arguments by the government and by four of the 15 state beef councils that have intervened in the suit seeking to sustain the checkoff, which compels ranchers to subsidize the private speech of corporate state beef councils, even when they disagree with the message that their compelled funding pays for.

Not so, states R-CALF USA in its filings. “That is not how the Constitution works,” wrote R-CALF USA’s lead counsel, David Muraskin of Public Justice. Responding to the government’s insistence that the court should defer to its determination when it sufficiently oversees the councils’ speech to deem it “government speech,” Muraskin wrote that Supreme Court precedent establishes the standards by which speech is government speech, and the state council’s speech falls well short of those standards.

For example, the filings state that the government does not have the authority to appoint or remove any of the directors of the 15 private state beef councils, meaning the speech from those councils is private speech. In addition, the filings point out that the government does not approve the oral communications of any of the 15 state councils, nor does it approve the speech expressed by the private third parties that the state beef councils regularly fund with checkoff money, such as the National Cattlemen’s Beef Association and the U.S. Meat Export Federation — both of which, according to R-CALF USA, promote the consolidation of the animal agriculture industry.  Compelling cattle producers to fund such private speech is “patently unconstitutional,” the documents assert.

While the government and state beef councils have tried to argue that the opt-out option available to ranchers, which allows their money to be redirected to the federal checkoff program, is an acceptable work-around, R-CALF USA explains the U.S. Supreme Court has held opt-out opportunities fail to meet the Constitution’s requirement. In fact, the filing explains, under Supreme Court case law, placing the burden on citizens to opt-out is recognized as an improper tool used to violate their constitutional rights.

Consequently, R-CALF USA asserts the remedy to correcting the alleged ongoing constitutional violation by the government is to allow cattle producers to voluntarily opt-in to paying for the councils’ private speech before any of their money is used for such purposes.