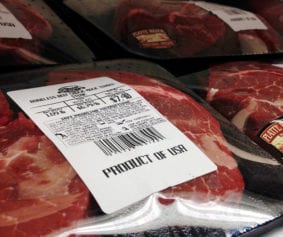 Billings, Mont. – On Friday, R-CALF USA submitted written comments to the U.S. Department of Agriculture (USDA) Food Safety and Inspection Service (FSIS) regarding the petition seeking a change to FSIS’ guidance policy that currently allows any beef product passing through a U.S. slaughtering or processing plant to bear a Product of USA label.

The petitioners who are seeking a change to the FSIS guidance policy proposed an amendment that R-CALF USA believes would result in an unenforceable policy that would continue allowing the misapplication of a USA label even on foreign beef.

In its comments, the group pointed out that the FSIS guidance policy is intended to cover all meat and poultry commodities. However, because both the current policy and the proposed amendment allows a change of origin to occur at processing, R-CALF USA stated the guidance would violate the U.S. mandatory Country-of-Origin Labeling (COOL) law that prohibits the use of a United States origin designation on any lamb, chicken, goat meat or venison that is not exclusively born, raised, and slaughtered in the United States.

Recognizing that beef and pork are now outliers from the COOL law, the group nevertheless recommended that the FSIS adopt the stricter born, raised and slaughter standard as only then could the guidance policy accurately apply to all meat and poultry commodities.

Although this was the group’s only recommendation, it also pointed out that the FSIS has not properly implemented the Federal Meat Inspection Act (FMIA) that incorporates the labeling requirements of the Tariff Act of 1930. Those labeling requirements state that only when an imported meat product is changed into a different product during processing can the foreign meat product lose its foreign identity.

The group also cited the recent decision in its COOL lawsuit that it filed along with the Cattle Producers of Washington (CPoW). In that decision, the court found that U.S. cattle producers were harmed when Congress repealed COOL for beef, after which foreign beef was allowed to be labeled a product of the USA even though it was not derived from an animal born, raised, and slaughtered in the United States.

R-CALF USA contends that producers will continue to be harmed so long as the FSIS maintains a guidance policy that allows foreign beef or beef from foreign cattle to be labeled as a product of the U.S.A.

“Any policy that does not reserve the USA label for beef exclusively born, raised, and slaughtered in the United States allows meatpackers and importers to steal the good name and reputation of the U.S. cattle producer. The USA label is our trade mark and should not be sold by the USDA,” said R-CALF USA CEO Bill Bullard.