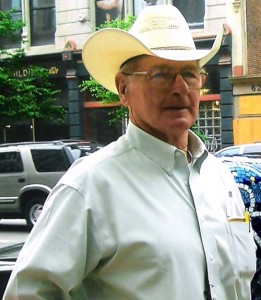 Hello Texas, my name is Stayton C. Weldon, member of the First United Methodist Church in Cuero, Texas, where I reside with my wife Mildred of 36 years. We have five children and nine grandchildren. I have a herd of Hereford cows, breed them to Brahman bulls and raise the F-1 Braford heifer, which is very adaptable to the climate we have in this area.

Texas is a unique state. It has approximately half of the breeding cattle in the U.S., and the seven-county area that I live in is even more unique because it controls a very large portion of the cattle in Texas. This area is very rich in history in the development of the cattle industry beginning with the Chisholm Trail. The trail was the starting point of many cattle being driven to northern markets. The many small rural towns were at one time very economically secure because of the agricultural industry in this area. All of the security is fast disappearing because of the monetary devaluation of the farming and ranching economies in the area, as well as all over the United States.

Unlike our friends in the northwestern part of the country, we have factory jobs and large metropolitan areas that provide economic stability; therefore, the youngsters raised in agricultural families have an alternative for providing for their families. A lot of these young people’s hearts are still in agriculture because there are many of them that return to agriculture after retiring from their jobs. Some of them live close enough to carry on with the family traditions with which they were raised: The Weekend Rancher.

However, there are many, like myself, who are not satisfied with holding a job in town (I did teach school for 15 years) while ranching or farming on the weekend. Those that had the ability to stay on their land had one of two things in their favor: crops or cattle in the shade of oil and gas wells or wives that worked in town, the latter of which applied to me. It is great if a wife wants to work, loves to work, and enjoys her work. It is another if they HAVE TO WORK. It is my goal to eliminate the HAVE TO.

It is these people that I fight for in trying to develop sustainable agriculture.

I was a member of the R-CALF USA concept for approximately six years before the organization ever came into existence. I joined cattle organizations trying to get them more attentive to the needs of the independent producer and not pass or back policies in favor of the multinational corporations that were convincing producers to use unscrupulous measures such as captive supply contracts rather than selling in the open market for a profit. It didn’t take long for me to realize that a new organization made up of only independent cattle producers was the only answer. It was better to help an organization fight for what I believed in rather than fight organizations trying to get them to adopt policies that would benefit the producer.

During my travels all over the Midwest, I met all of the people that later became founders and members of the only organization that represents me: an independent cattle producer.

I was appointed to the position of Region V Director of R-CALF USA in May of 2007. Our very own Lone Star State, with its very historical history in developing the cattle industry, is the lone representative of Region V. I was honored about the appointment. I truly hope to fulfill the position with honor, integrity, loyalty and wisdom.