The Dakotas Ring a Bell! Over 500 Attend Fall Meetings Resulting in 74 New Memberships and $46K Raised for Fair Cattle Markets! 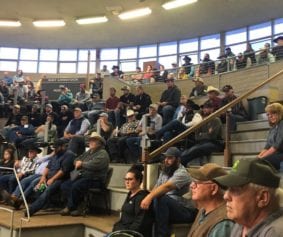 R-CALF USA leaves behind a robust fall campaign with a myriad of success. R-CALF USA hosted South Dakota and North Dakota meetings in Faith, Lemmon, Mobridge and Mandan. In combination, over 500 members and guests attended the events, which resulted in 74 new memberships and $46K raised to support fair cattle markets. The monies and memberships generated from calf sales are used to help R-CALF USA succeed in its mission to improve domestic cattle prices and to maintain a healthy, viable cattle industry in the United States.

According to Bill Bullard, R-CALF USA CEO, the summer campaign met a critical need in communicating with cattlemen regarding the dysfunction in the marketplace and ongoing efforts in its class action lawsuit.

Bullard explained the events leading to the lawsuit. Following a robust 2014 cattle market, cattle prices collapsed in 2015 without explanation; and in defiance of the basic economic elements of supply and demand. R-CALF USA requested that the U.S. government investigate the collapse; however, the government took no corrective action.

As a result, on the behalf of producers, R-CALF USA filed a class action anti-trust lawsuit alleging the “Big 4” beef packers (Tyson, JBS, Cargill, and National Beef Packing Company) conspired to artificially depress fed cattle prices thereby inflating their own margins and profits. Through these actions, the lawsuit alleges that the packers are in violation of U.S. anti-trust laws, the Packers and Stockyards Act, and the Commodity Exchange Act. 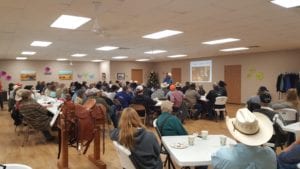 Bullard notes that the lawsuit is historical because it is the first of its kind; producers stepping to the plate fighting for their markets. He adds that the lawsuit could take years to complete. In the meanwhile, producers continue to suffer from depressed prices and market dysfunction as elements of the market continue to operate in disarray.

R-CALF USA continues to work aggressively to bring order to the cattle market. Bullard urges producers to be diligent, vocal and involved; and urges producers to educate themselves. R-CALF USA held four events this fall for the purpose of reaching out to its grass roots members and to promote its “Fall Run Calf Sale Fund-Raisers.”

Dace Harper is part owner of the Faith Livestock Auction. He and his wife Jodi have two children; and, have made their lives in ranching. Dace began auctioneering about 10 years ago, which led to an ownership opportunity at Faith Livestock two and a half years ago.

Harper notes that the “prices of the cattle aren’t cutting it for folks.” He says, “R-CALF USA seems to be doing a good job! They have the best interest of the cattlemen at heart.”

In spite of the cattle prices, Harper is an optimist. “I see hope or I wouldn’t be doing what I’m doing.”

Meyer has been instrumental in R-CALF USA’s allegation that checkoff dollars are not used in accordance with their original intent. According to Meyer, “What is happening is that the checkoff is being used against farmers and ranchers.”

Meyer further explained the evolution of the current state of impropriety regarding the utilization of the checkoff dollars. Prior to 1996, there were two distinct organizations. The NCA (National Cattlemen’s Association) was essentially a proponent for producers. The Beef Industry Council of the Live Stock and Meat Board was an advocacy group for the meat packers. In 1985, the beef checkoff was initiated and was under the purview of the NCA. In 1996, the NCA and the Beef Industry Council were merged to form the National Cattlemen’s Beef Association (NCBA.) This merger gave the meat packers direct access to checkoff dollars as follows.

The Cattlemen’s Beef Board (CBB) oversees collection of the checkoff and approves its budget and distribution. All checkoff dollars are allocated through the approval of the CBB operating committee. The operating committee is made of up 20 committee members, 10 from the CBB and 10 from the NCBA (through the NCBA’s organizational division known as the Federation), thus according the meat packers significant influence over the distribution of checkoff dollars.

Meyer notes “82% of NCBA’s funding is derived from the beef checkoff.” According to Meyer, the NCBA’s access to millions of checkoff dollars helped the NCBA and other checkoff recipients to kill the country-of-origin labeling (COOL) law for beef in 2015. 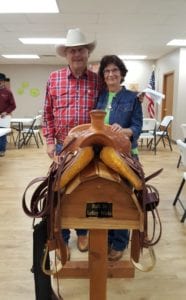 Lemmon, S.D. – Lemmon, S.D. was host to an informational meeting held on September 11, 2019. R-CALF USA CEO Bill Bullard spoke at the meeting. The Lemmon meeting was attended by approximately 75 members and guests resulting in 20 new memberships and earnings of $3,700.

Lester and Sharon Longwood attended the Lemmon meeting. The Longwoods won the 2019 raffle saddle crafted by Baxter Badure at the R-CALF USA annual meeting in August. Mrs. Longwood expressed her delight in their good fortune, “Oh my goodness….it has such beautiful detail and workmanship. It’s a work of art!” In a card of thanks received from the Longwoods, they graciously extend thank you’s to the saddle sponsors:

Fort Pierre Livestock Auction; Ag-West Feeds of Burwell, NE; 1st Interstate Bank of Sturgis; Jenner Equipment of Rapid City; Newell Service Center of Newell, SD; 212/79 Service Center of Newell, SD; Spurs Saloon & Steakhouse of Nisland, SD; Leroy Wicks and Baxter Badure. In their note, they also extend their gratitude to the mission of R-CALF USA, “Thank you for your tireless efforts on behalf of all of us in the cattle industry!”

Regarding the meeting, Mr. Longwood exclaims that “it was grade “A” worthwhile and definitely informed some folks. We the cattle producers are a minority and every head count makes a difference.” he said, “We are always impressed with Bill’s wisdom and knowledge of the industry. We learned tremendously about the intricacies pertaining to how the packers buy and sell.” The Longwoods noted that they saw some new faces; and a lot of good information was disseminated to the public. 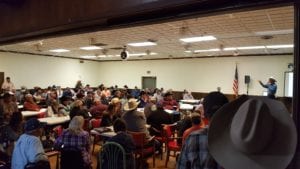 Mobridge, S.D. – Mobridge, S.D. was the second “Fall Run Calf Sale” in R-CALF’s Dakota fall series. The Mobridge meeting was attended by about 200 folks resulting in 34 new memberships and earnings of $21,530.

Casey Perman of Mobridge Livestock did a live auction fundraiser and notes that “R-CALF is the only organization working for the cow/calf producer.”

“It was a great turnout,” Kent Lahren reflected upon the meeting. “I got to see my neighbors and friends; and saw their concern for the industry. Everybody is hurting from this (the market).”

Lahren sold calves that day at Mobridge. He said, “Walking into the sale barn was like walking into a funeral. People’s faces showed stress. I’ve seen great operators broken and lost. An old-time rancher told me, “This isn’t fun anymore.” 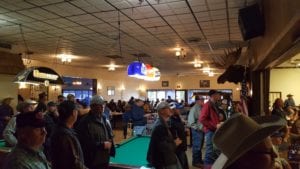 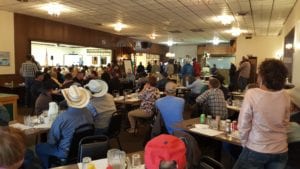 On a profound note, Lahren reflects on his tenure of R-CALF USA membership. “I have been an R-CALF USA member for 19 of its 20 years. Those things that we spoke of 15 years ago have come to fruition. We stood back and we let it happen. Now it’s real and it’s affecting the pocketbooks of cattlemen and feeders. Finally, people are standing up wanting their voices to be heard; they want justice. We need to get the farmers and ranchers involved. When cattlemen no longer have a voice, vertical integration will ensue because we have lost the fight.”

Lahren speaks with vision as he discussed issues pertaining to the market. “Our elected officials don’t enforce the anti-trust legislation or the Packers and Stockyards Act. Because of that, we have recently lost nearly 84,000 farmer/feeders. The farmers now must turn to China to sell his grain instead of feeding it in the local community.”

Lahren implores people to get educated. He points to the American Ranchers episode featuring R-CALF USA with Tomi Lahren that debuted on Fox Nation in September. The episode can be accessed at www.labelourbeef.com. The page includes a promotional video and instructions on how to watch the full segment. The page encourages members to share the promotional video via social media in order to “help President Trump hear Tomi’s message loud and clear by sharing the promotional video.”

In conclusion, Lahren said that, “When Kelly and I hauled our calves in to the Mobridge sale barn, we told them to hold $200 to give to R-CALF; and they are going to! There’s some big sales coming up in my home town and I’m hoping that people will kick in to R-CALF.” 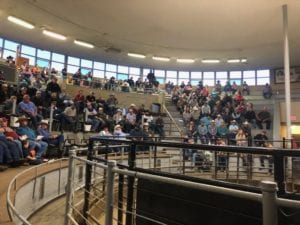 Mandan, N.D. – Mandan, N.D. was the final in R-CALF’s Dakota series. The Mandan meeting boasts attendance of 200 members and guests resulting in 20 new memberships and earnings of $10,500.

Patrick Becker attended the meeting and spoke at an impromptu calf sale fundraiser. Becker said that “We had an excellent turnout! People are frustrated and anxious about cattle prices. How do you pay your bills?”

Becker pointedly noted that “We are in a critical situation in our industry. The Holcomb fire caused cattle prices to drop $.11 (per pound) but box beef went up $.25 (per pound). That sure doesn’t make sense and it indicates impropriety in the marketplace.”

With a wry tone, Becker held out with some hope. “R-CALF USA is the only one speaking out for the cow/calf producers. We need to get behind them to make a difference.”